There Is No Freedom in People Pleasing 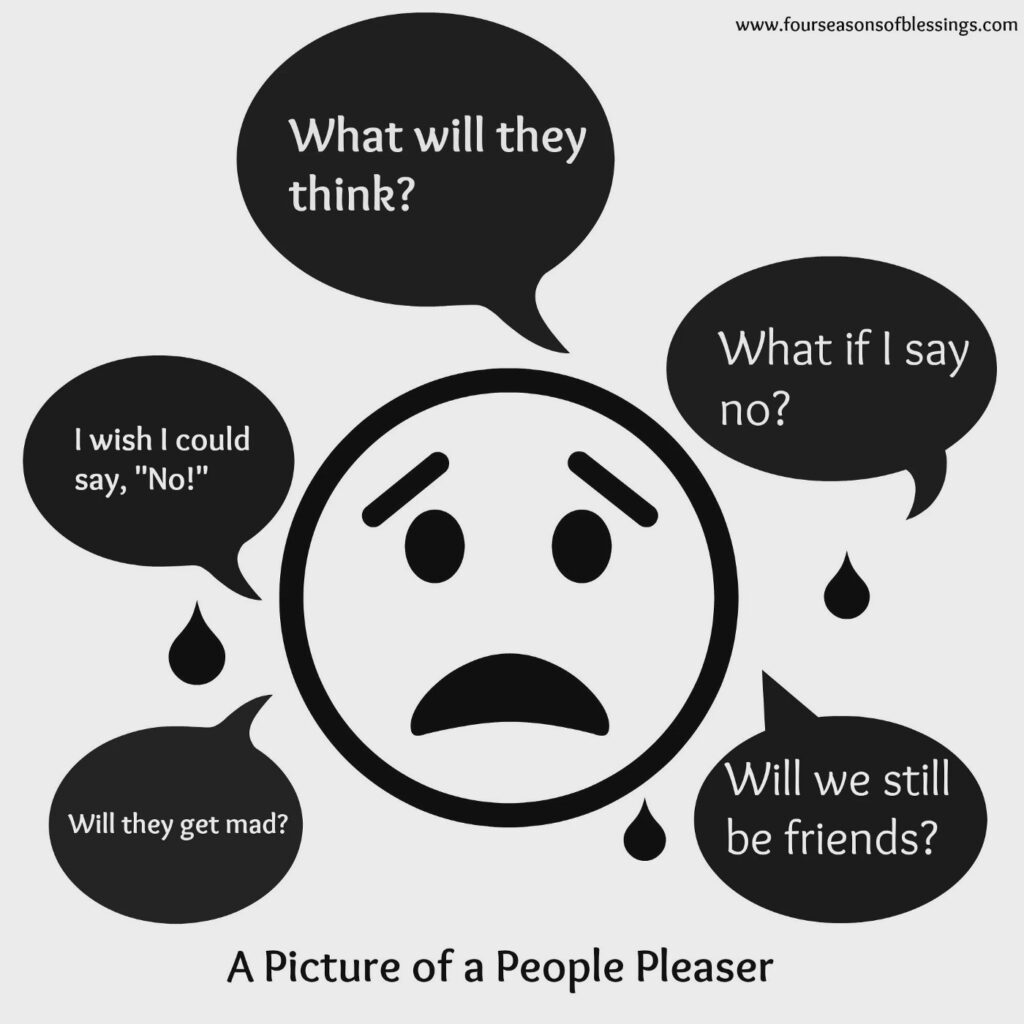 I’ve had an old mind-story rear its head again over the last few weeks, and it’s been fascinating to watch the unfolding of the experience and the realisations along the way. Have a read to see what resonates for you, and what might be enlightening for you in this.

It started a few weeks back. I woke up with a sensation of self doubt in my stomach.

It was fascinating to see the sensation was there, and it was recognised as the ‘self doubt sensation’ but no story got attached to it. The mind didn’t come up with anything to blame in the world for why self doubt was happening. So the sensation was just there, and over time, it dissipated…or at least it must have done. I just got on with my morning and at some point I noticed it was gone.

Then over the following couple of weeks, it was as though that self doubt experience wanted more attention. There was suddenly a flurry of situations where it looked like I was getting it wrong. I don’t know how you feel in those moments, but I have a very familiar ‘oh s%&*t’ experience. As a thought and as a physical sensation. And these moments were bringing that.

Again, fascinating. Situations that a week ago wouldn’t have seemed like a big deal were now looking like a problem — feeling told off for saying something in a group that didn’t fit with the group’s way of working. Feeling terrible for someone feeling upset by what I said. Said from good intentions but not received as that. Feeling like I got it wrong by offering a suggestion in an organisational project group when I’m not the lead on the project.

And so first, with all of this, there was a realisation of life waking me up from thinking ‘it’s always going to be like this’. Life does this for us whether the ‘always like this’ is either seemingly ‘good’ or ‘bad’.

And so I saw that this was waking me up from a stream of lots of things going ‘right’. That thought of ‘I’m getting it right’ must have begun to be believed as a permanent truth — it’s the only reason I’d have needed to be woken up from it.

I must have started to believe ‘this is how things will always be now’. But of course that’s never true. Of course life will always have ups and downs, goods and bads. We just don’t need to cling to the goods or resist the bads. It’s just how it is. Like a wave waving — ups and downs are inevitable and baked into the system.

Insight received. Move on? Not quite yet…

I thought that was it. I thought the insight about the situation had been seen and I’d return to free flowing. But no, over the coming days, it became evident there was more to see.

This realisation came to light when working with a group in an organisation last week and I shared my experience of looking to my deepest fear when I was in a coaching programme a couple of years back. I’d seen that my deepest fear was me, alone, in a dark, dank bedsit, an alcoholic, cockroaches running across the floor, and — crucially — nobody wanting anything to do with me. Abandoned. It was a pretty depressing image. But one which helped to be looked at directly rather than having it hidden in the shadows of the mind.

And so it came to the surface to be shared last week, in a light jovial way with the group, and providing the perfect reminder for me to connect the dots of the domino-effect of the mind:

Get it right…because then you’ll please people….and then they won’t abandon you.

Notice how any behaviour of trying to get it right and please people makes perfect sense if that domino-set of beliefs is in play.

And life — so perfectly — will always reflect it back to us if we’re stuck in a belief — hence all the situations I had of seeming to get it wrong and being dis-pleasing in the days leading up to this point. Perfect!

Previously taken as ‘gosh I really must try harder to get it right and please people’. Now the discomfort of it is known as a wake up call. A siren to say ‘you’re in ideas! you’re lost in beliefs!’

So was that the end of it?

Just to make sure I’d really seen the discomfort of such beliefs, it was shown to me again with the members call last week. People I love and care about wanting to join the call but me saying no to them because they’re not coaches in this work. Argh! The discomfort of that ‘no’ because of the idea that I will displease them and they’ll abandon me! Fundamentally confused in the belief that I’m responsible for how another feels (an impossible ambition to fulfil!) It felt so horrible — and there was a knowing of its untruth. Purely from the feeling of it.

So I saw it. I sat with it. I shared with my coach about it. And my community group. I didn’t try to make it go away or relieve myself of it by saying yes to those people so I could (temporarily) feel better. And it passed. Of course. It always does! Like that self doubt sensation that began all of this.

Might those who I said no to be upset? Might they leave the places they spend time with me in? Yes. They might. And I have absolutely zero control over whether they do or not. And zero control over how they experience a yes or a no from me.

Might I end up in a bedsit, an abandoned alcoholic. Yes. That is totally one of infinite possibilities in life. And would I be doing the best I could in that state the same as I’m doing my best in this state now? Yes.

All I have the ability to do is to stay in my own experience, clearing up my own confusions, because it’s the only reliable route I’ve seen to moving through and lessening the grip of these old thought patterns. To become ever-clearer and cleaner in words and actions.

And what about you?

Do you resonate with the fear of getting it wrong, the people pleasing or the fear of being abandoned? It would be totally understandable if you did because these beliefs are universal. They’re not personal.

They’re like pre-programmed fears in all human minds and they’re brought to life, or made to appear true, through the unique experiences we have. All perfectly coordinated so the story of me looks convincing and compelling.

And if the fear of abandonment doesn’t resonate, maybe one of the other 5 core fears that psychology recognises is your ‘go-to’ storyline:

Fear of being abandoned or rejected.

Fear of damage to the body.

Fear of being controlled, restricted or overwhelmed.

Fear of being worthless, ashamed or humiliated.

Fear of the end.

I don’t share these to be doom and gloom. Purely to bring into the light the impersonal, universal narratives of the mind. Whichever of these feels familiar, it says nothing about you. All it tells you is the prevailing radio station your psychology came pre-programmed with.

Where’s the freedom with all this?

The freedom is in recognising you are not your psychology. That freedom is what you are — before ideas of being a human with these associated fears.

The freedom is in recognising that, although it has your unique flavour of life experience, when you’re living in fear you’re living from a repetitive, pre-programmed narrative. You’re listening to the radio station that all human minds are tuned to — we simply took it to be saying something truthful about ‘me’.

The freedom is in recognising that these fears don’t need to be alleviated or resisted, they are here to be dissolved within the spacious loving freedom that you already are.

And that — when you’re ready for this experience — life will keep sounding its siren for you until you give up trying to get it right and please people (or do anything else) in order to be OK. It’s inviting you to realise that OK-ness is what you innately are. Already. You can relax.