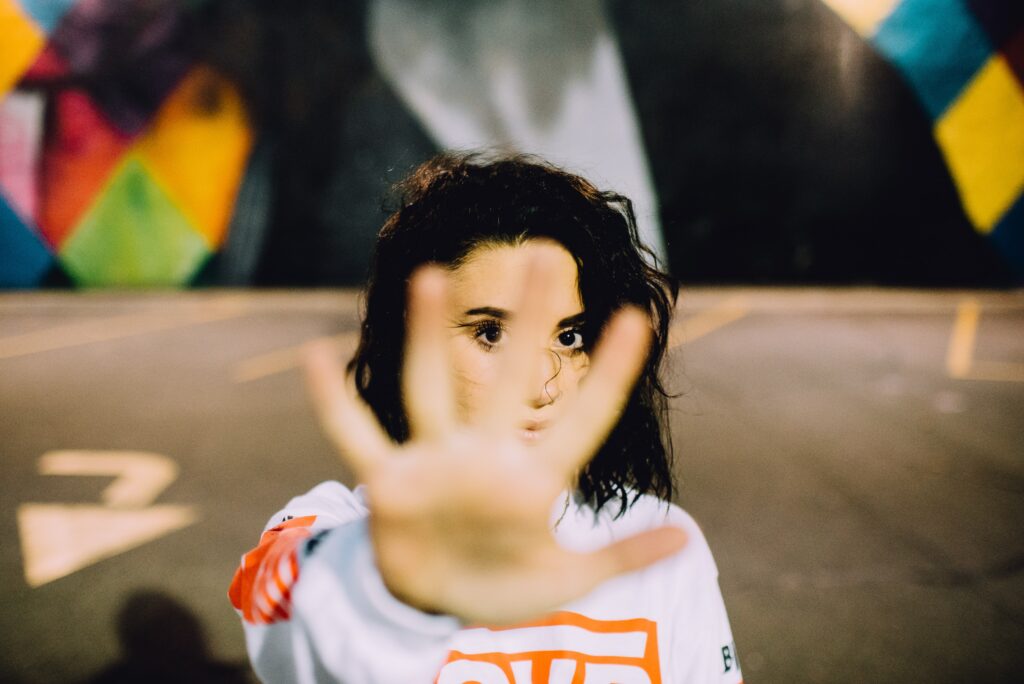 It’s so normal to think we need to put boundaries in place to protect ourselves from something, but usually this is done from the non-peace of our thought-created ideas. Have a read to drop beneath the ideas into the truth of peaceful boundaries.

Sounds so normal doesn’t it? Someone said this to me recently and it got me thinking…We live so much of life feeling like ‘it’ or ‘they’ are out to get us, to take our time, to cross our threshold of what’s OK, to take more than they’re entitled to.

And therefore it looks like ‘I need to put in boundaries’ to protect myself, my time, my professionalism, my…anything.

But let’s break this down to see what’s actually happening.

What is a boundary?

Can you point to it? Or put it in a bucket? No. So if we can’t do that then we know we’re working with a thought-created idea that appears real. In giving it a name, ‘boundary’, and possibly correlating it in your mind to the image of a wall or fence, you’ve given it an apparent reality. It feels real — because you bring to life what you think.

But when you come out of the conceptual idea of it, drop beneath the label and the images, you find there‘s nothing there in reality to look at, point at, put in place or move.

So now you know the essential nature of a boundary is thought, what’s the nature of thought?

Have a look for yourself — it’s much more impactful that way. Just pay attention to your thoughts for a moment and see what you notice about them.

You’ll come to realise that thought is ever-changing, transient, and also not something you could point to or put in a bucket. It’s this ephemeral nothing that we’ve learnt to pay alot of attention to, and when we pay attention to thoughts (or to any thing in fact, but let’s stay with thoughts) they become more real. Our attention gives things their reality.

Consider…Have you ever had the experience where you thought about something so much, turning it over, considering implications, the problem getting bigger and bigger. Until someone appeared with some fresh information that changed the whole context and suddenly your thought-plate was wiped clean?

Where did the ‘big problem’ go? See how it was only ever made of thought, made to feel real and definitely big because your attention was on it and that attention, filtered through a belief in its big-ness and problem-ness, created ‘big’ and ‘problem’.

And see the transience of it, the moment attention moved to the new information, a new reality was created where ‘big’ and ‘problem’ had disappeared.

So if this is the nature of thought: to change. And if attention’s job is to bring to life whatever is thought or believed, then, yes, ‘thinking’ a boundary is a real thing that must be put in place and held to, is going to create that experience.

Have you ever done that, tried to hold firm to a boundary you put in place? Did you find the world kept pushing up against it, as though trying to batter it down? Was it exhausting ‘trying to hold your boundary in place’?

So consider instead that thought changes all the time, and, given boundaries are creations of thought, boundaries also change all the time. So what is it you’re trying to put or hold in place? And therefore how much energy are you spending on thought-created boundaries that keep slipping through your fingers?

Maybe pause a moment to consider that.

And then let’s move to…

How would you give anyone something of yourself?

How? How could this happen? What is ‘your time’ as opposed to ‘my time’. How could you say you own a segment of time that is yours? Similar to the idea of ‘boundaries’ notice that ‘time’ is also an idea — because where is it?

Yes you can show me your watch and your diary, but those are representations of time, like maps. Show me the territory of time. If they are the maps, take me to the actual ‘thing’ they represent.

Can you find anything? So what is it they’re taking, other than an idea?

Can you sense the hint of victim within those ideas, that somehow you’re at the mercy of another. It’s very normal from that place to then flip to a place of adamance about boundaries being needed. If it looks like you’re being ‘done to’ then a normal response is to build a wall to keep those dangerous people away.

But go back to the beginning of that chain reaction, what did they actually do? What did you actually do? Were you forced to act against your will, or was a ‘do this for them’ thought simply believed above a ‘don’t so this for them’? If so, and going back to what we said about boundaries, all that can ever happen then is for attention to create that reality of you ‘doing this for them’. They had nothing to do with that.

Indeed you had nothing to do with that either, you didn’t choose to believe one thought over the other…the system chose from the complex matrices of thoughts and ideas that are within your particular human experience. On that occasion, the system chose ‘to do it’.

Now maybe you wished you hadn’t done it, maybe you felt drained by it, maybe you felt hard done by, or taken advantage of — but all of those are in fact a beautifully designed level of discomfort trying to wake you up. Inviting you to see that you followed a past idea of ‘what I should do for this person’ above the responsive intelligence-in-the-moment that you really are. The discomfort of those thoughts is not telling you that you did the wrong thing, or they did the wrong thing, or that boundaires are definitely needed. The discomfort is only ever trying to wake you up, out of ideas, and back into the reality of now.

Because the reality of now is what you really are. And it’s whole, loving, peaceful, and strong. It knows diminishment is impossible and, this brings us to…

Who is the self that you’re loving?

We talk about needing to love ourselves but who is the self that you’re loving?

I am all for love and compassion — it’s the only level of understanding that enables us to see all our confusions for what they are, and to dissolve them — but it really helps to know what it is we’re loving, and why.

If attention is on loving (i.e. code word for ‘maintaining’) a thought-created self that thinks it needs things to be a certain way, there will continue to be an experience of victim to these terrible persecuting others who try to take from you and against whom you have to put in strong boundaries.

If attention instead is on the only unchanging reality of your Self (which is sometimes called Love) and if that Self gets to see — without agenda to maintain or destroy — what’s going on, really, then naturally the patterns of the thought-created self are dissolved in its love. The futility of the round-and-round chasing game of persecutors, victims and boundaries is seen. And it stops.

That’s when spontaneous, perfect-for-this-moment boundaries appear. Peacefully arising from the clarity of the Self you really are. Peaceful boundaries. No need to draw in or push away from. Just a clearly spoken OK-ness saying yes to this and no to that. With a quiet strength that is undeniable.

Let’s look at an example. Especially noticing that word victim. Have you already reacted against that and thought ‘not me, I’m not a victim’? I get it. I was that. I believed in being strong, independent, capable and I would have vehememtly denied that victim was in my repertoire. But the vehemence was in fact the indication that victim was definitely in my repertoire, just not able to be looked at. Not allowed in to my experience. Seemingly too dangerous.

Little did I know that the thought-created self holding ideas of ‘independence = good’ and ‘victim = bad’ was in fact the very idea that kept creating seeming victims in my experience who had to be made less victim-y. And that brought people in who would ‘take my time’ or ‘distract me from my work’ — seemingly leaching independence from me.

I tried for years to ‘love’ that self — but not real love. It was a clinging. A needy ‘this is who I am and I need to be this kind of person, and they need to be that kind of person, or else…’. The sentence would never have been finished in my mind but in truth the thought-created self assumed that if it didn’t hold on to this ‘idea of me’ then there would be nothing left of me. There was a belief that an absence of ‘I’m strong and independent’ would result in a nihilistic world with no me able to put in boundaries, a me being walked over, a me entirely at sea in the world, definitely victim to others’ demands.

How wrong that narrative is.

In fact it’s this thought-created self’s very absence that we long for.

This is the self that you don’t need to love in an ‘I’m sticking up for myself’ way or in a ‘you’re important and you’re worth it’ way (can you feel the un-peaceful adamance in those?). It is the self we can love with a truthful understanding of how it came into creation, where the ideas that correlate with its appearance came from — and to see they’re not true. And, most fundamentally, to see that this self is a thought which, like those thoughts about boundaries, and like the thoughts about giving something of yourself, are fabrications brought to life via attention: Constructs, made to seem real when believed, but which have no stable or consistent reality of their own.

They arise now, in the absence of ideas.

By getting curious about where it looks like you ‘need’ boundaries. What’s behind that need? Finish the sentence…‘I need a boundary because…’

Get curious about the truth of what comes after the ‘because’.

And what’s behind the idea of a need?

If you’d like to begin exploring with me in an easy, accessible way, become a member on Patreon. You get a library of truth-pointing resources delivered straight to you, curated from a variety of teachers as well as my own work, plus connection and discussion with others in the community.