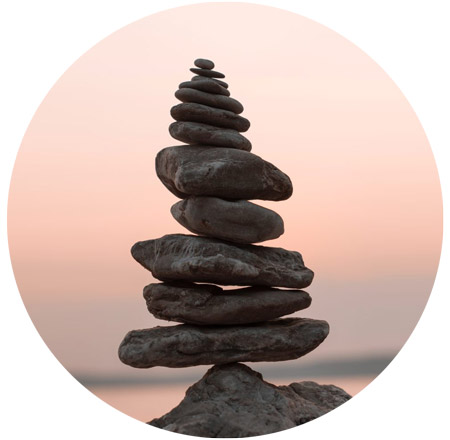 When we have multiple pulls on our time things can feel out of balance. It’s one of the main things clients come to me with — needing re-balance of one kind or another. And yet, each and every experience of ‘out of balance’ has the same origins. When we know that, balance gets a whole lot simpler.

I wrote recently about leadership and said I’d write a linked piece about balance because it’s such a common feature of experience and something that was more than a one-liner.

The out-of-balance problems I hear from clients tend to show up as:

Which of these sound familiar?

Normally we identify what we believe to be the source of imbalance — it’s those meetings, those people, this responsibility — and then we look straight to tools practices and approaches to use to fix these broken aspects of our life. Once they’re behaving in the way we need them to, we’ll be OK.

Here I’m going to suggest an alternative to going straight to tools, practices and approaches. But first I’ll share my journey that got me there.

My out of balance used to be between work and kids.

And then balancing that with kids and home responsibilities where I was taking to heart the societal rules that said I should be at home, be a good mum, give the kids quality attention, keep on top of the chores, food shopping, party invites, homework, school letters, dress-up days…, see friends, be on social media…,husband, yes, time with husband too…

Oh and fit in self-care, take time for me, slow down, have a spa day — ‘you need a break’ the marketing system told me, ‘you work too hard’ my mum told me, ‘practice mindfulness or meditation’ the wellbeing folk told me.

My experience of trying to balance it all was hectic. I was achieving and doing it all — but on a knife edge. Feeling like a ball could be dropped at any moment. It seemed like a minor shift in requirements would send the whole lot off balance — no slack in the system for changes to the plan!

Nothing ever actually dropped — not that I can remember at least — but it always felt like that possibility was looming on my shoulder. And if that, then serious consequences, serious failure, disaster.

I tried all sorts of approaches to manage my time and maintain balance.

Practical things like holding a day in the diary for space, looking for things that could be stopped, working part time, hiring a VA.

I worked with a therapeutic coach, exploring why I wanted to work, what thoughts seemed to be driving that and how those thoughts could be untrue and what I could think instead.

Some changes happened. Some grips that had been held so tightly began to loosen, some things let go of and a sense of ease appearing.

I wrote a piece around then about being a recovering Type A with this quote summing up a key shift at that time:

“I think if I’m a high achiever it makes me better, but it only makes me worse.”

Another shift, another nudge to balance.

But back then I didn’t know the real source of change. I didn’t understand how our human experience is created. I was working hard, picking through the rubble of my mind, turning over rocks, throwing some away, analysing others, keeping the ones I liked. Painstaking archaeological thought-work with a little brush to remove the dust and see what was going on. Like I said, some changes happened, but not because of the new practices, not because of the thought-management…

Also back then I wrote about how I was exploring Buddhism and that I might write about things more once that had processed…that exploration led me to something else. Not Buddhism but the invisible variable that sits behind all human experience, all belief systems, all religions.

An invisible variable that has always been at work and we just didn’t know it.

So just over a year ago I first sat down with my coach in this invisible variable and one of the issues I told him about was the juggling act I was performing. I remember at the start he challenged me about who’d set the standards about which balls to juggle, how they needed to be juggled and for how long. Then we spent the rest of the session with him introducing what’s really going on, where change really comes from. No discussion of balance or not balance. No identification of sources or solutions to my balance problem.

Because, unlike what we’ve all been led to believe, finding balance doesn’t come from out there.

They’re correlated to the change, not causal.

If they were causal, every piece of feedback would make a difference and change behaviour. Every thought-exploration would lead to immediate shifts. Every new habit practiced would turn into permanent change — and we all know that none of those are true.

Behind all those activities is one variable which is the key to change — insight.

When we see — really see — something. When something really lands. When we have an insight or realisation that hits us squarely between the eyes. Then we change. From that point forward change becomes obvious and effortless.

Change is, and always has been, an inside-out job.

Shift in here = change out there.

And so with balance.

Through my work with Piers, a fundamental shift in seeing how our human experience is created, led to a shift from within.

My propensity for left brain competitive, drive, task and achievement balanced out with the right brain preferences for connection, compassion, creativity and comfort with ambiguity.

The outside effect was obvious actions happening to balance work and home. No longer running away from home into work made my attention in both places easier and more productive. A greater sense of spaciousness and capacity, calm and clarity. Rushing ceased, there was (and is) presence to the moment, and a resourcefulness to solve whatever diary clash or change to the schedule appears as needed.

And none of that requiring practicing of new habits, reciting mantras or implementing experiments to change.

Once we see and understand how the system works, we work in alignment with it, and notice when we’re out of alignment. We know what to pay attention to and what’s static on the line. We can stop running around desperately seeking the next tool, approach or practice that promises balance.

It doesn’t mean tools, approaches or practices aren’t applied, sometimes they prove useful. But any application is done with ease. Tools and approaches used with grounded ‘this makes sense to use for now’ rather than desperate ‘oh my god if this doesn’t work I don’t know what I’ll do’.

This is real balance.