We all have ‘wild card’ thinking - but what to do about it? 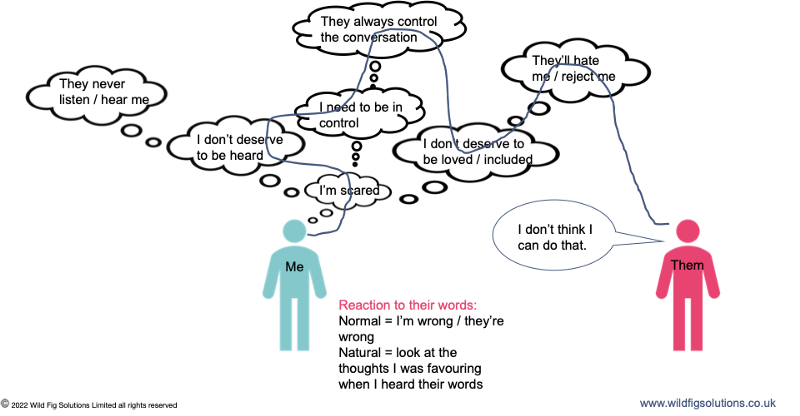 I used to spend so long analysing relationships and interactions — especially with coaching clients — to try and figure out how I or they needed to change. It gets much easier when you know the one thing that makes an exchange with anyone look like a problem.

“if it looks like a problem to us, then it’s telling us about us — that we’re living in favour of thought rather than in favour of what’s actually here and now”

I wrote these words in a piece for my members last week and really appreciated Nat for pulling them out and sharing in a tweet because we’re all walking worlds of wisdom (yes, you! Everyone!) and sometimes it takes another to repeat our words to hear them.

What stood out to me when I saw these shared back was about the hours and hours I used to spend analysing relationships — especially client relationships — and wondering ‘what was going on in that session? What did I need to do or say differently? What requests should I have made which I didn’t? What was stopping them from realising what they could do, or from making progress with their actions? What more could I do to help them with that?

There was lots of ‘me’ focus and it was all with a baseline of ‘it looks like that went wrong, how can I fix it next time?’

At the time, all those hours of analysis and planning looked necessary: planning for ‘how I’ll be in this session to help them more’ looked like I was being responsible and professional. Even though the plan was always held lightly, ready to be let go the instant the client arrived — which often happened.

At the time, all those hours of analysis and planning looked necessary: for someone who liked to be organised, in control, on the front foot, prepared so I could be at my best however the client showed up — made perfect sense! It looked like all of that had me ready for ‘the worst’ so that anything else was a bonus.

So at the time it was useful.

And then it stopped being needed.

Because as I came to see that the world is a function of how I am — not of how it is — there came to be only one place to look and ask questions from. Questions which were still ‘me’ focused but from an entirely different standpoint.

I’ll come to that standpoint in a moment but let’s back up a bit first, to see that:

Think of a time when you were feeling really negative about someone and the whole exchange felt difficult, they looked difficult, they seemed stubborn, judgemental, unwilling to listen or change.

And then — either during the conversation or afterwards — you had a realisation of the fact that they are more than this. That you’ve seen them — or have a strong inkling of them — also being capable of being open, flexible, constructively conversational.

And suddenly they changed.

Now, in front of you, was that open, flexible, constructively conversational person.

We would tend to put it down to ‘something else’ that happened, but for now, just hold the possibility that the change in them was a function of the change in you, and that, if you’re ever going to support a process of change, you are the only leverage point you have.

Our normal standpoint is look at situations and ask ‘what’s my fault and what’s their fault and how do I fix that?’

This standpoint is to look at situations and ask ‘what’s my response telling me about how I was in that moment’?

Although it’s not even really how ‘I’ was — more accurately it’s ‘what was my conditioning up to in that moment?’

But if it had been programmed with a random ‘wild card’ setting that meant every now and then it would bring you a cup of coffee, or juice, or a plant! then that’s what it would do!

It’s the same with us.

We’ve been programmed with a whole bunch of conditioning about how to behave and not behave, what’s acceptable and what’s not, what I need in order to be OK, or not. None of these are absolute truths — they all fall over with any kind of inquiry — but they are our temporary, limited truth when they look necessary for survival.

They are like our wild card programming popping up.

It pops up in correlation to certain situations and it can pop up seemingly totally randomly. But you’re not doing it. In the same way the robot isn’t choosing when to play its wild card, you don’t choose when to evoke your conditioning and react to a situation.

And this changes the whole game.

Because now you’re not looking at a situation with another and saying ‘it’s my fault I reacted’ or ‘it’s their fault they triggered me’ you’re just saying — look at the wild card that got pulled in that moment. You’re seeing how that behaviour (bringing a plant instead of a cup of tea!) made perfect sense based on that wild card program. And you then see how that wild card looks less convincing to follow the next time you’re in that situation.

Because, unlike the robot, you are consciousness. There is an intelligence that you are, beyond anything that could be programmed in. There is an awareness that ‘when I do that, this happens’ and, in the spaciousness of the non-judgement that you are, that programming changes all by itself.

No analysis required. Simply seeing it. Understanding it. Realising it.

And that is what brings you into the here and now

“if it looks like a problem to us, then it’s telling us about us — that we’re living in favour of thought rather than in favour of what’s actually here and now”

Thought about a situation is the wild card popping up. It immediately takes you out of the here and now, and into imagination — about them, about you, about what might happen based on what has happened before — and none of that is necessary for (in fact it hinders) the responsive intelligence of you, right here and now, in this moment.

All you need is to see and understand the wild cards for what they are and the rest takes care of itself.

Would you prefer more of that?

As coaches it is easy — in fact you’re taught — to analyse sessions and figure out what I did wrong, what I want them to do, how I can change to make all of that different— and it doesn’t have to be that hard. If you’d prefer an easier, more loving, more honest way of increasing your coaching presence, then this 8-week programme is for you. We start on 4th Feb so get in touch to check it’s a good fit.